A Brief History of Money – From Barter to Crypto Currencies 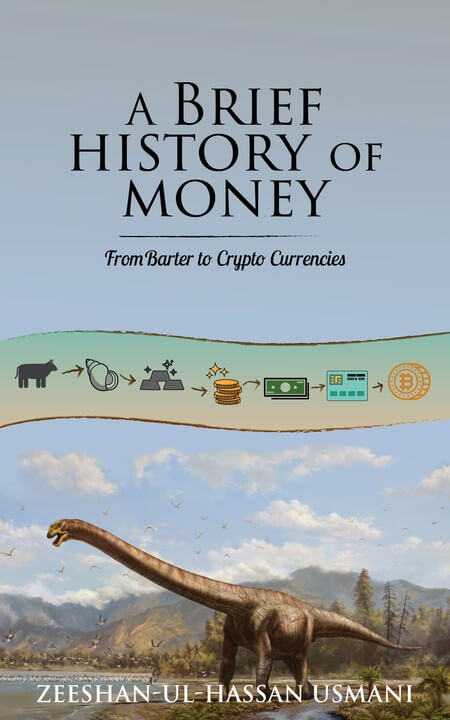 I’ve just published my book on Kindle. Here is the link to Buy.

Women, wealth, worldly possessions — these are the themes that have fueled stories from time immemorial. However, little did we know that the concept of money as we know it would one day be turned upside down.

A lot has been changed in last the 2,000 years including the concept of money itself. It is worth mentioning that contrary of gradual decent of biological evolution, money always evolves in big jumps, from barter to writing on clay sheets, from commodity based money to precious coins, from gold-backed paper currency to sovereignty-backed fiat and from digital credit-debt registers to state-issued bonds. The world is standing at the right moment — an ever-connected environment is calling for the next jump — a form of money that is able to evolve new traits, best suited for machine-to-machine and machine-to-human interfaces for the globalized world and where people can conduct trust-worthy transactions without intermediaries. In a world where close to 100% of the population has access to cell phones, while only half has the access to toilets or tooth brushes, it would be disappointing to see if money does not evolve.

The base DNA of world economics has changed through technology in the last two decades. The same environment that was once suitable for the fiat money is harming us now in more ways than we can imagine. The dynamics and evolution of money is always been the invisible chain of transactions and transfers among human populace.

Like biology, money is a historical science, where one constructs a historical narrative of a chain of events with tentative information and recorded details about the environment in which it takes place to explain the role, place and importance of money.

With respect to inventions and new technology these last four centuries or so, Muslims have lagged rather behind. About a hundred years ago, a conference was held in Lucknow where paper currency — its use and Islamic injunctions with regard to it — was debated. Maulana Abdul Haq Haqqani had also been invited. Every few minutes, he would insist for the refreshments to be served. Naturally, this enraged the administration. Here they were, trying to arrive at some consensus regarding the wealth of the Muslim ummah, their zakat obligations and the protection of their 1400-year Islamic heritage of dirhams and dinars. And here was the Maulana with nothing but food on his mind. Just as calmly, he replied, say what you may, do what you will, paper currency will make its entrance, and once it does, it is here to stay.

Then airplane flights labelled as Haraam, and then the use of loudspeakers, and then the printing press were faced with the same indignation. For the last 200 years, the Mulsim Ummah has been unable to arrive at any consensus regarding the permissibility or non-permissibility of the camera.

Alas, today cryptocurrency faces the same fate. In all likelihood, nobody will really listen to my point of view. But when history evokes the various claims of haraam, then the tradition of Maulana Abdul Haq must also be revived. I am not even in the position to request you for food, but I may request you to just read this book instead.

And may I make another request: just hold on to this book for ten years. Time has this propensity to iron out all knots and wrinkles.

Awaiting your counsel, critique and opinion.

You can buy the book from this link.